Economic growth forecasts for this year were cut to 4%, reflecting the impact of the latest national Covid-19 lockdown as Finance Minister Rishi Sunak unveiled his budgetary plan for the UK's recovery from the pandemic.

Citing forecasts from the Office for Budgetary Responsibility, Sunak said the economy would grow by 7.3% in 2022, then 1.7%, 1.6% and 1.7% in the following years. The economy contracted by 10% last year, it's worst performance in 300 years.

The current year forecast compares with an estimate of 5.5% growth made last November before the government was forced to introduce a third national lockdown having loosened restrictions before Christmas, leading to a surge in new cases and outbreak of a UK variant of the virus.

"The OBR now expects a return to pre-Covid levels by the middle of next year, six months earlier than first thought," Sunak said as he delivered his Budget speech to parliament. He added that the OBR expected a “swifter and more sustained recovery” than they were expecting in November.

However, by 2025, the OBR still expected the economy to be 3% smaller than it would have been, Sunak warned. 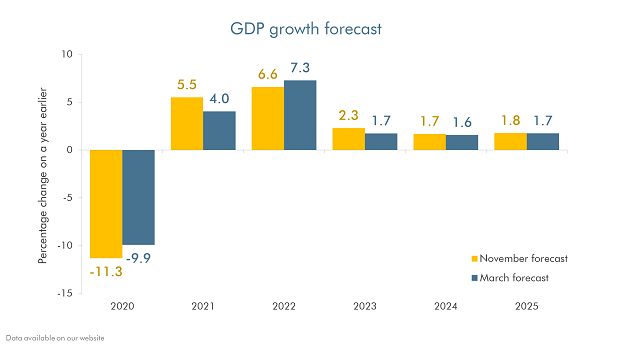 Sunak has spent £280bn to protect jobs and businesses from the ravages of the pandemic and stop the downturn turning into a lasting economic meltdown. As a result the UK’s national debt is £2.1trn and debt as a percentage of output, at 97.9%, is the highest since the early 1960s.

In his latest measures, Sunak extended virus-related rescue support to households, businesses and public services by a further £44.3bn, taking its total cost to £344bn.

There was no increase in personal income taxes, national insurance or value-added tax. However, personal tax-free thresholds were frozen until 2026 and corporation tax was slated to rise to 25% from 19% in April 2023. However companies with profits of less than £50,000 will still pay 19%.

The OBR said it expected this measure alone would raise £17.2bn a year by 2025/26. The thresholds for the basic and higher rates of income tax were frozen at £12,500 and £50,300 respectively after tiny increases this April, netting the treasury £8.2bn a year by 2025/26, as wage growth pushed more people into higher tax brackets.

Analysts at Pantheon Economics said Sunak's decision to deferred any new fiscal rules until the autumn created "uncertainty about whether additional tax rises will be needed in time".

"We expect him eventually to commit to ensuring that the debt-to-GDP ratio is falling by the end of this parliament, which would set a borrowing ceiling of about 3.5% in 2024/25, above the OBR’s 2.9% forecast. Nonetheless, additional tax rises might still be needed, if as we expect, GDP undershoots the OBR’s medium-term forecasts, which still incorporate very little scarring from the recent recession," said Pantheon chief UK economist Samuel Tombs.

Week ahead: Chinese trade data, US CPI in focus